However you say it, the practice of tying tassels on the four corners of a garment, especially a tallit, are a reminder to faithfulness.

At Ephods and Pomegranates, we hand tie all tzitzits to finish off each tallit. 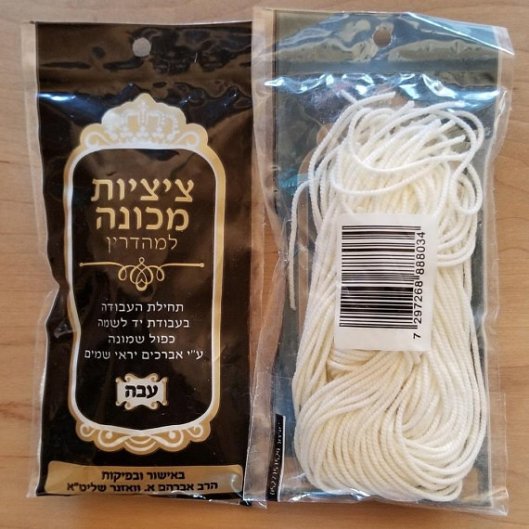 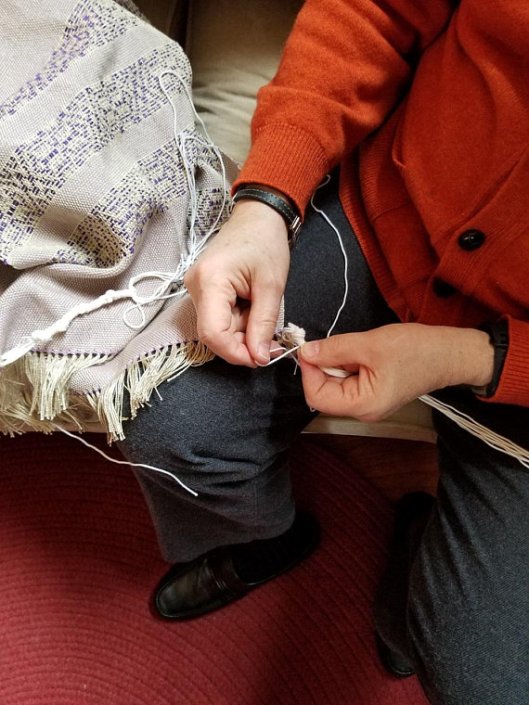 Will Tying a Tzitzit

It is a positive commandment to put tzitzit on any four cornered garment that you wear, as it says in Numbers 15:37-41:
The Lord said to Moses as follows: Speak to the Israelite people and instruct them to make for themselves fringes on the corners of their garments throughout the ages; let them attach a cord of blue to the fringe at each corner. That shall be your fringe; look at it and recall all the commandments of the Lord and observe them, so that you do not follow your heart and eyes in your lustful urge. Thus you shall be reminded to observe all My commandments and to be holy to your God. I the Lord am your God, who brought you out of the land of Egypt to be your God: I, the Lord your God.
As is apparent, this mitzvah is given in order to remember God, His great love, all of His commandments and to do them. While the large tallit is used specifically for prayer, it is a mitzvah in itself to wear a garment with tzitzit all day. Traditional Jews, therefore, wear a tallit katan (small tallit) all day and a large tallit just for morning prayers. The tallit is not worn at night because the mitzvah stipulates that one should see the tzitzit. (The implication is that this should be seen by light of day, not by artificial light.) The tzitzit have to be at the corners; but there is a question as to where the corner is on a four cornered piece of material. A general guide is that the hole be three or four finger breadths from the corner edges. There is an opinion that the tzitzit should hang on the side of the corner and not on the bottom toward the ground. There is a custom not to cut the tzitzit to shorten them, but to bite them with your teeth.

How to tie tzitzit: ritual macrame

Before you try tying tzitzit to your tallit, it is advisable to practice with twine or heavy string looped around a chair leg.
Although you can spin or devise your own tzitzit strands, it is easier to buy a tzitzit pack, which is available at most Hebrew bookstores.
There will be sixteen strands in the pack (four long ones and twelve short ones; four off 60 inchest and twelve at 40 inches). Separate these into four groups with one long and three short in each. The longer strand is called the shammash and is the one used for the winding. Even up the four strands at one end and push the group through one of the corner holes in the tallit. Even up seven of the eight strands (the four being doubled) and leave the extra length of the shammash hanging to one side.
With four strands in one hand and the other four in the other hand, make a double knot near the edge of the material. In order to fulfill the mitvah of tzitzit, it is customary for you to say “l’shem mitzvat tzitzit,” “for the sake of performing the mitzvah of tzitzit,” each time you tie a knot Take the shammash and wind it round the other seven strands in a spiral (seven turns).
Be sure you end the winding where you began, otherwise you may end up with 7? or 6? winds. Make another double knot at this point (four over four). Spiral the shammash eight times around. Double knot. Spiral the shammash eleven times around. Double knot. Spiral the shammash thirteen times around. Final double knot. This is the common, and halakhically precise type of tying. There are, however, two variations on this:

The symbolism for the numbers is central to the overall symbolism of the tallit. Seven and eight equals fifteen, which in gematria (numerology) is equal to the two letters yod and heh the first two letters of the Name of God. Eleven is the equivalent of vav and heh the last two letters of the Name of God. The total, twenty six, is thus equivalent and representative YHVH the four letter Name of God. Thirteen is equivalent to the Hebrew word Ehad alef, chet, dalet which means One. So to look at the tzitzit is to remember and know that “God is One”. According to the second way of winding, each section is a different letter of God’s four letter Name. The central commandment surrounding tzitzit is:

“And you should see it and remember all of God’s commandments and do them”.

How do the tzitzit do this?

In gematria, tzitzit = six hundred. In addition there are eight strands plus five knots. The total is six hundred and thirteen which, according tradition, is the exact number of commandments (mitzvot) in the Torah. Just to look at them, therefore, is to remember all the mitzvot.