If you’re in Houston, and a friend of Claire and Frans, this might be for you! 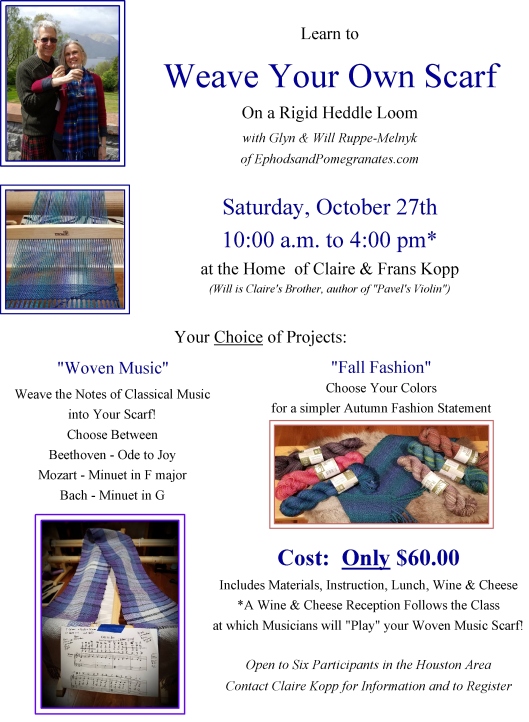 “How  Lovely Is Thy Dwelling Place,” from the Brahms Requiem, soprano line . . . by Will.

This is what the sound of Brahms looks like. 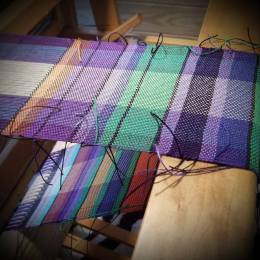 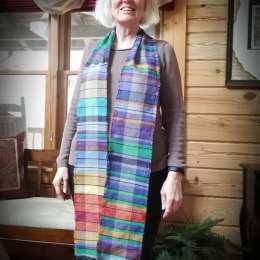 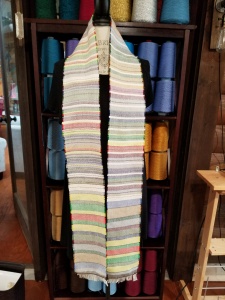 Have you ever wondered what the sound of Bach looks like?  No, not on an oscilloscope, but in the rich colors of woven cloth, in a way that works just like sheet music?

You’ve probably seen me post before about the connection between music and weaving – the similarities between sheet music and weaving graphs.  My first [project was a portrayal of Mozart’s Piano Sonata No. 11 in A major.  Next was the Czech National Anthem, a gift for my first violin teacher, Lucie Carlson.

Here we have Passacaglia in C minor for organ, by Johann Sebastian Bach.  Each of the colors represents a different note, and the width of the bands indicates the time value of the note.  If you have the key to the colors, you can play this scarf just like sheet music. 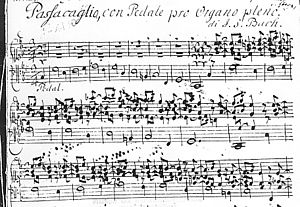 In woven fabric, this is what the sound of Bach Looks like, the first 40 measures or so.  It begins and ends with the opening on the bass pedals. Listen below: 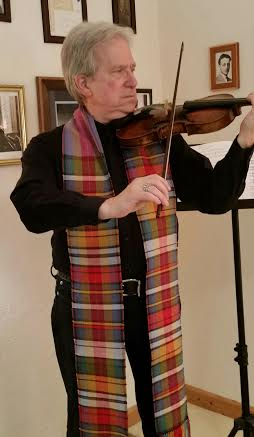 My first venture into the art of the handweaving of Baroque music on a loom is complete.  I am willing to bet that, unless you have been following this blog, you have never seen anything like it.

The horizontal color bands on the scarf are actually the musical score of the beginning theme from Piano Sonata No. 11 in A Major (for violin) by W. A. Mozart.  Over my right shoulder it reads from bottom to top; over my left shoulder from top to bottom.  The color indicates the note, the width of the bar indicates the length of the note.  A wide black bar separates measures; a narrow black bar separates notes.

Thus, the first measure (top left, just under the violin) is a dotted quarter note B, an eighth note C, and a quarter note B.  The final measure (bottom left or top right) is a whole G.  You can play by reading the scarf just like a musical score.

The plaid effect comes from the multi-colored warp.  The warp threads are arranged in the Fibonacci Series of numbers (1,1,2,3,5,8,13,21 – then back down again.  In the center is a single narrow Golden thread, which signifies the Golden Mean.  Golden Mean is another name for the “Golden Section, or Golden Ratio,”  the division of a line so that the whole is to the greater part as that part is to the smaller part (i.e., in a ratio of 1 to 1/2 (√5 + 1)), a proportion that is considered to be particularly pleasing to the eye.  It is the basic concept in esthetically pleasing architecture, and the foundation of Sacred Geometry, used in the construction of the great Cathedrals and the Jerusalem Temple.  It is a ration that exists everywhere in nature, for example the spiral shell of the nautilus.

The Golden Section has great significance in many Gnostic traditions, including esoteric expressions of Freemasonry.  And Mozart was indeed a Freemason, as am I.

The point of the project is the close relationship between musical scores and weaving graphs.  The weaver and the musician are one; a genuine meeting of the Bow and Shuttle.

If you are curious, here is what the scarf “sounds like” when “played” on a piano:

The scarf is woven of mercerized cotton, and is about 8′ long by 6″ wide. 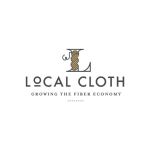